Are you concerned about how your favorite brands and companies are addressing climate change? The Climate Counts app for iPhone rates leading companies based on their climate impact and sustainability efforts, then gives consumers a chance to voice their concerns either by email or on social sites such as Facebook or Twitter. You can search for climate ratings either by company or industry. Find out more about this app and how Climate Counts is making a difference in this exclusive interview with Project Director Mike Bellamante.

LoveToKnow (LTK): What is the inspiration behind the Climate Counts app?

Mike Bellamante (MB): The Climate Counts iPhone app was developed as a way to give the everyday consumer an on-the-go option for making informed purchasing decisions. Now people can access the "climate scores" of nearly 150 household consumer brands to identify which companies are effectively measuring and managing their greenhouse gas (GHG) emissions. Although climate change has seemingly become a right vs. left issue, we think there are enough people out there who are ready to move from debating the science to developing solutions that address the problem. Many leading companies feel the same way, including Unilever, Nike, Levi's, UPS, etc.

LTK: What are some of the app's key features? 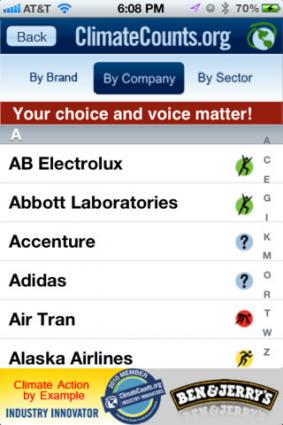 MB: The app enables users to not only identify which companies are performing well to reduce their impact on climate change, but it also allows them to drill down and see which brands that company owns. For example, it might not be common knowledge that Unilever has over 400 different brands around the world including Dove, Lipton and Ben & Jerry's. Our App allows you to access that information. In total I believe we have around 30,000 brands represented on our app. Another great feature is that users can Tweet and email companies directly to either support their performance or tell them to get on the stick!

LTK: How does a company get listed in the app ratings?

MB: Companies are essentially chosen based on gross revenue and whether or not they have a presence in the U.S. We try to cater to the American market as much as possible, as that's where we have the majority of our following. Our ratings cover 16 major industry sectors including electronics, appliances, shipping, banks, etc. With the growth of the social media industry, we're planning to add that category for the December 2012 release.

LTK: Have there been any challenges with releasing this app?

MB: The challenge isn't so much with the app itself as it is with the tracking the results. We've always been able to identify the number of people who have downloaded the app, but we're trying to get a better sense of how many people are actually changing their buying behaviors once they have the information.

LTK: What changes have you seen as a result of Climate Counts?

MB: Believe it or not, the biggest impact we've had has been on the companies we rate. We've heard many instances of CEO's not being happy with their Climate Counts rating which, in turn, has resulted in the dedication of resources to beef up their sustainability programs. This is the kind of change we like to see.

Playing a Role in Positive Change

LTK: What is the best advice you can give consumers who want to do their part to address climate change?

MB: I'd say it would be to take a conscious approach to shopping. Usually when we're buying something it's either part of our routine or we're using it as a form of escape from our daily lives. We need to get to the point that people are considering the types of products they're buying and the companies they're buying from. This is a difficult concept for folks to grasp, as people feel rightfully entitled to buy as much of whatever they want. In fact, our entire economy is based on production and consumption. I think gradually we'll realize that we can't continue operating at a deficit with regard to how much we're taking from the land without giving anything back.

MB: Not to diminish the importance of issues like abortion, gun control and poverty, but I think we need to begin viewing climate change as its own separate thing. It disturbs me to see how politicized the issue has become and how people are just linking it to their existing ideologies, as in "oh, you're environmentalist, you must be a democrat." When science says smoking causes cancer, or the earth revolves around the sun, I tend to take their word for it as I, myself, am not a scientist. I wish more folks would do that.