Since launching in 2008, the App Store for iOS has built up a nearly limitless inventory of different iPhone apps that span a wide variety of genres and categories. Some cost money, but many of the best apps are available as free downloads. The most popular ones focus mainly on social networking, communication and multimedia.

With so many free apps to choose from, it can be difficult deciding which ones you really want. The follow apps are all highly useful, as well as entertaining, and any of them would make a great addition to your iPhone.

Given that Facebook is the most popular social network on the Internet today, it should come as little surprise that the Facebook iPhone app is also the most popular app available for for the Apple iPhone. The Facebook app is easier to use than the mobile website, and it provides better real-time communication.

The iPhone app lets users do nearly everything that they would be able to do through a traditional browser on a computer, including reading the news feed, liking items, posting photos, participating in chats, and checking into Facebook Places.

Whereas conventional radio stations leave listeners at the mercy of the DJs, the Pandora Radio app for iPhone puts the users more in control of the music they'd like to enjoy. Start with the name of a favorite artist, song or genre, and the Pandora app will automatically generate a custom radio "station" that plays similar music.

The free version is completely free, but users have the option to upgrade to Pandora One for $3.99 per month to eliminate ads, get higher quality audio and unlock custom skins. The iPhone app is integrated with the main web-based Pandora service.

Instagram rose to fame initially as an exclusive iPhone app. It has since expanded to other platforms and to a web-based interface, but the main Instagram app for iPhone remains one of the most popular ways to share photos instantly with friends, family and colleagues.

The unique square design and range of image filters allow users to "transform everyday moments into works of art." Since it is a social network, users can also search for friends and "follow" them via the mobile app. The app also supports instant sharing through other social networks like Tumblr, Foursquare, Facebook, and Twitter, as well as Posterous and Flickr.

According to YouTube itself, an astounding 100 hours of video are uploaded to the site every minute. Thanks to the increased speeds offered by cellular networks and Wi-Fi access points, the YouTube app for iPhone is equally popular among mobile users. The app gives users the ability to playback most videos from the YouTube library, as well as the ability to sign into their accounts and access subscriptions, playlists, comments, and more.

At its core, the iPhone is still a communication device, but this communication extends beyond conventional voice calls and text messages. The Skype iPhone app allows users to enjoy free voice and video calls with other Skype members, just as they would from the corresponding desktop client. The mobile app can also be used for instant messaging and photo sharing.

As for calling long distance, it's sometimes less expensive to call regular mobiles and land lines via the Skype app, using Skype Credit. The app works over both Wi-Fi connections and 3G.

A slightly different take on the legendary Scrabble board game, Words with Friends Free for the Apple iPhone allows you to participate in up to 20 simultaneous games online with other players from around the world. Letter tiles are simply dragged and dropped, and there are bonus spaces for double letter, triple letter, double word and triple word, just like Scrabble.

The app can integrate with Facebook, so it is easy to setup new games with existing Facebook friends. The built-in chat function is useful too, as is the push notification feature that lets you know when it is your turn. 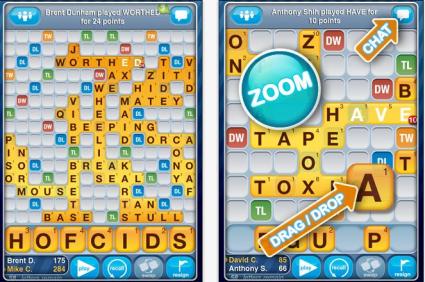 Additional features in the mobile app include travel watch, an "expect rain" tab, and detailed weather conditions, as well as severe weather push alerts, and support for multiple locations. Forecasts are provided for hourly, 36-hour and 10-day time frames.

What started out as a modest micro blogging platform has grown to be a huge source of information for major world events as well as what people are eating for lunch. The Twitter iPhone app works much like the Twitter website by providing a full feed with all the real-time stories, pictures, videos and conversations from the Twitter timeline.

Many of the linked images appear when a specific tweet is selected, and it is possible to follow or un-follow Twitter profiles from the app. Image uploads, including image previews, are also supported natively within the app.

While paid games like Angry Birds have proven incredibly popular, Temple Run has charmed thousands of users with its simplicity and its thrilling gameplay. Seemingly inspired by movies like Indiana Jones, Temple Run tasks the user with running away after getting his hands on the invaluable treasure. Swipe left and right to turn, swipe up to jump, swipe down to slide, and tilt the iPhone to send the hero running toward the left or right side of the path.

Temple Run and its sequels have won several awards and are very highly regarded.

The Best Things in Life Are Free

There are literally thousands of free apps available for the iPhone through the App Store, and more are being developed and launched every day. There are productivity apps to stay connected to the office and shopping apps to find the best price, as well as apps that are designed just to provide fun. There is something for everyone, including people who don't want to spend any money to download apps.