With so many different models coming out from different companies on a frequent basis, it can be a challenge deciding which Android smartphone to get. Looks are important, to be sure, but it is arguably even more important to look 'under the hood' to compare the features, specifications and unique software optimizations of each phone.

Among companies that develop and sell Android smartphones, Samsung enjoys a dominating 65% market share as of early 2014. Its current flagship device is the Galaxy S5, which builds upon the previous four generations of Galaxy smartphones. A powerful quad-core 2.5GHz processor ensures that the phone will easily handle just about any task. The 2800mAh battery provides all-day battery and the unique Ultra power saving mode, which reduces functionality in exchange for extended battery life, allows the phone to run for 24 hours on just a 10% charge.

The Galaxy S5 has slightly rounded corners, a thin 8.1mm profile, a metal-like silver frame and a removable faux leather back plate. The oval-shaped home button doubles as a fingerprint reader, which is used as one of the lock screen unlocking options. Samsung has also included Air Gestures on the S5, which allows the user to simply hover her finger over the screen for added functionality.

CNET says the "outstanding" Galaxy S5 is "a superior superphone that hits every mark." The device's camera is excellent.

For users who enjoy the Samsung experience but prefer a larger display, the Galaxy Note 4 with S Pen is a great option to consider. 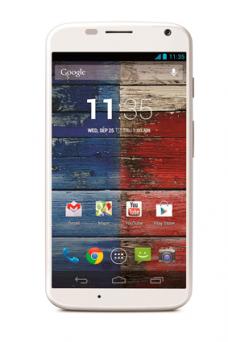 Android-powered Motorola smartphones first gained popularity through the DROID line offered exclusively through Verizon Wireless. The second-generation Moto X is a different kind of device, offering an experience that is very close to stock Android phones. Very little skinning and additional apps are installed. The 2014 version of the Moto X is larger than the 2013 model, increasing from a 4.7-inch to a 5.2-inch screen, while simultaneously increasing the resolution from 720p to 1080p.

The phone design features a slightly rounded back with a number of customizable back covers and trim colors via the Moto Maker website. Indeed, back covers are even available in alternate materials like bamboo and leather. The Motorola logo is more prominent on the back and the LED flash is now arranged as a circle surrounding the camera lens. Dual front-facing speakers have been added as well.

With a great "premium design" and "no compromise performance," the 2014 Moto X was named "the best Android smartphone ever made" by The Verge's Dan Seifert. 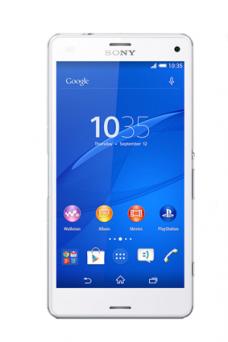 The Sony Xperia Z3 continues the premium look and feel of its predecessors with a thin block-like design. The corners are only slightly rounded and the phone boasts a unibody glass design. The ports have been specially sealed to achieve the IP58 certification for water resistance. This means that the Xperia Z3 can even take pictures underwater.

Performance is top-notch and the 20-megapixel camera, coupled with software enhancements, makes for some terrific photos. The Android operating system has been skinned by Sony, installing additional Sony software like Album (which replaces Gallery), Walkman (which replaces the Music Player), PlayMemories and apps to tap into the Sony online store for additional content.

The "dazzling" Xperia Z3 is the only smartphone that supports PS4 Remote Play, streaming games from a local PS4 direct to the display of the phone itself on the same network.

While it is officially known simply as the HTC One, the M8 designation helps to differentiate this phone released in 2014 from its predecessor, the HTC One M7 from 2013. The fundamental design of the HTC One M8 is very similar to the M7 - it has a full metal body with a distinct premium feel. The back is slightly curved. While there is a dark band underneath the display that says HTC, there are no soft buttons; instead, the back, home and multi-tasking buttons are shown on the screen itself.

Aside from its classy premium design, the HTC One M8 comes with a number of HTC software optimizations via the company's Sense UI. These include features like BlinkFeed, which combines several updates into a unified 'at a glance' experience. Rather than compete on megapixels, the HTC One M8 has a dual 4-megapixel camera configuration on the back with what the company calls "Ultrapixels," providing better low-light performance. There is also a high-resolution 5MP camera on the front for selfies.

The "stunning design" with "loads of power" led the HTC One M8 to receive an impressive 5/5 perfect rating from TechRadar.

The first Android smartphones didn't have displays any larger than four inches in size, but that has dramatically changed in the last couple years with the arrival of increasingly larger devices. It is noteworthy that all of the flagship caliber smartphones listed here all have displays that are five inches or larger. They're all big and they're all powerful.

However, when it comes to choosing the best smartphone, the largest phone or the most powerful device isn't necessarily the best choice. It is important to balance design, performance, software, features, battery and price. Consider these factors when comparing top Android phones.