As much as people enjoy the convenience of mobile phones, an increasingly prominent issue is that of the dangers of cell phone towers. Is it safe to live close to a cell tower? What are the possible health effects? Take a look at what recent findings say.

In March 2018, a study was published in the journal Environmental Research that demonstrated a link between cell tower radiation and cancer using a lifetime study of rats. The study found that mostly the male rats suffered from Schwannoma of the heart, which is a rare type of cancer, as well as brain tumors. Skeptics, however, point out that the research institute involved in the study has a history of overblown claims about cancer-causing agents. Moreover, lifetime studies are problematic because there can be many reasons that cause death of elderly animals.

However, the U.S. NTP conducted a $25 million study with similar methods. The peer-reviewed results will be published in late 2018. A preliminary report published in 2016 noted that the study found the male rats to develop two types of cancers, which were the same ones found in the Italian study's male rats. The NTP reports that the number of rats affected was small, but still "of interest." In a statement to Scientific American, the National Institutes of Health said, "It is important to note that previous human, observational data collected in earlier, large-scale population-based studies have found limited evidence of an increased risk for developing cancer from cell phone use." While these studies focused on the long-term usage of cell phones and not exposure to cell phone towers, the radiofrequency radiation is the same and the study's data may be significant when examining exposure to towers.

Although the evidence so far is inconclusive, the World Health Organization declared in 2011 that the electromagnetic fields caused by cell towers could be "possibly carcinogenic to humans." A group of scientists reviewed the available evidence for the WHO, and while they didn't feel there was enough evidence to conclude that there was a risk, they also felt "that there could be some risk, and therefore we need to keep a close watch for a link between cell phones and cancer." Like the NTP study, the WHO statement focuses on the use of mobile phones but they also covered the available research on "environmental exposures associated with transmission of signals for radio, television and wireless telecommunications."

The International Association of Firefighters expressed their opposition to have cell phone towers installed on top of fire stations in 2004. They cited a small study of firefighters done by Dr. Gunnar Heuser. Brain scans of the firefighters revealed damage he claimed was caused by low-level radio frequencies and the firefighters had symptoms such as weakness, confusion and memory problems.

More recently, in 2017 Dr. Heuser published a study in Reviews on Environmental Health that found that people with long-term exposure to electromagnetic fields had problems such as "headaches, intermittent cognitive and memory problems, intermittent disorientation, and also sensitivity to EMF exposure." The sample size for the study was only 10 people so the results' implications are not clear. 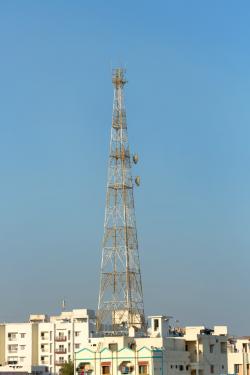 A study done in India and published in the International Research Journal of Engineering and Technology in 2017 surveyed people living near cell phone towers. The survey participants complained of a list of symptoms including headaches, depression, insomnia, nausea and fatigue. They claimed these began after the towers were installed, however, they could not say for sure that they experienced these symptoms specifically because of the towers. The researchers concluded that while the effects of the towers on people are not clear yet, "the harmful environmental and health issues may prove to be very critical and therefore, it is the right time to take precautionary measures by doing more research and detailed study on human health."

What Is a Safe Distance?

The American Cancer Society states on their website that there is no known data on safe distances, but if you are worried, contact your local government to ask them to measure the strength of radiofrequencies coming from the tower near you. Radiation from the towers is also affected by buildings, geography and your home construction. Watchdog website EMWatch advises that if you live 400 meters (about 1,300 feet) or more from a tower, you are not at risk.

At this point, it's difficult to say if the radiation from cell phone towers cause health problems in humans. There appears to be a possible risk, but no significant scientific findings have been found yet. As more towers are installed worldwide, there's a demonstrated need to conduct more research to determine whether people should be worried about living and working near a cell phone tower.