The source of much public debate, the issue of whether to allow children and teens to bring their mobile phones to school has been discussed and debated at length across the country. Even now, there is no clear-cut answer or conclusion. There are many arguments against allowing cell phones in the classroom.

When a child is in school, his or her purpose there is to learn. Young people can be easily distracted from their studies - and having easy access to a mobile phone during class can make it easier for them to lose focus. According to a 2010 study from Pew Research Center, 64% of students say they have texted in class and 25% have made or taken a call. And it's not just talking to others. That same study noted that 46% of students play games and 23% access social networks on their phone at any time. If they become bored with the class material, it doesn't take much for them to take their cell phone to play some games or to check their news feed on Facebook or Twitter. How can you expect a child or teen to absorb the knowledge they need to learn if they're not even paying attention? 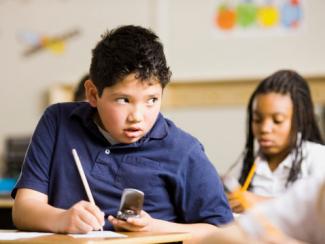 Obviously, kids won't be able to take out their cell phones and talk to one another in the classroom during an exam, but the concept of "passing notes" has stepped into the age of technology, thanks to text messaging. Texts can be sent quite discreetly while in the classroom. Taking it one step further, a student can excuse himself to go to the washroom, only to use that time to send text messages about important questions.

It's also important to bear in mind that cell phones are advancing and improving faster than ever. Smartphones can surf the web, providing high-tech ways for students to look for test answers online. Some models have advanced calculators, and depending on the software, may even be able to run custom applications that can contribute to academic dishonesty. Just to look at the statistics, a study from The Benenson Strategy Group in 2009 stated that 35% of students have used cell phones to cheat. Additionally, 41% of students admit to storing notes on phones to use during tests and 46% of teens admitted to texting friends about answers. The possibilities for cheating and copying are literally limitless when students have access to cell phones in class.

Cell phone theft is a problem in America with 3.1 million cellphones being stolen in 2013, according to Consumer Reports. Now add still developing brains, hormones and social status to the mix, and you can have the perfect combination for stealing if a particular individual brings an especially expensive cell phone to school. The last thing you want to do is to tempt the would-be thieves by sending your child to school with a piece of equipment that make him or her a target. Lockers are more likely to be broken into, for example, if they know there is something of value in there.

Kids will be kids, so with hormones raging during their school days, there is a distinct possibility that some students may take pictures or videos that they shouldn't be taking. Given that nearly every cell phone these days has a built-in digital camera, it becomes too easy to take a picture of someone without the person even noticing. These photos are also easily uploaded and shared over the Internet, social media or texted to friends. All it takes is a simple Google search to see news stories of teenagers expelled or suspended for distributing illicit pictures of others like these students in Shakopee Public Schools. Can you imagine the uproar if pictures were to arise of girls in the dressing room or boys in the locker room?

Along the same lines, cell phones also make it easier to cyberbully, which is when a person uses electronic communication to intimidate, threaten or humiliate a person. Not only can cell phones make it easier for rumors to spread like wildfire through the school with a simple click of a button, but students can also send mean or hurtful texts to students and post inappropriate pictures of students.

Data from the Cyberbullying Research in 2016 showed that 33.8% of students have been bullied in their lifetime, 11.9% have been threated through a cell phone text and 11.1% have had a hurtful image of them posted. In addition, a whopping 25.7% have had one or more different types of cyberbullying done to them. With cell phones readily available in schools, cyberbullying can become a lot easier to accomplish.

Cell phones can easily become seen as status symbols among students. In some schools, it is the more privileged kids that own cell phones or that have the latest phone on the market. This can lead to envy and cause socioeconomic diversity among students. Those with lower-end phones or no phones at all often become jealous and resentful. Those with the higher-end phones can show them off and look down on those who don't have the latest phone. 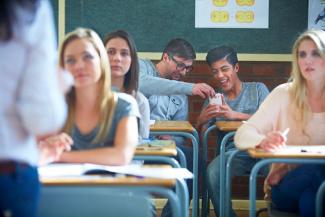 Cell phones are becoming more and more advanced mini computers that allow students to access material at the click of the screen. While most schools have filters and regulations to block out inappropriate material, with 48% of students looking up unsuitable sites, they can find a way around this. This coupled with larger classrooms can make access to inappropriate material easier. Now imagine students texting that material to other students. Pretty soon, it will be everywhere.

Many students use the internet or access social media sites without teacher or parent supervision. These students can be targeted by predators. Predators lurk in chat rooms, on social media sites and other websites that are of interest to students. With the use of smartphones and other devices, it can be hard to monitor a student's online activity.

The EPA has regulations that discourage too much exposure to technology and allowing students to have cell phones in school can increase their screen time during the day. Cell phones give off a low level of non-ionizing radiation for which the long-term effects at low levels are still being studied. However, allowing students to use their cell phones during school adds to their exposure to this radiation, which can in turn have increased harmful effects on the developing bodies and minds of teenagers.

The Other Side of the Story

Realize that cell phones are not necessarily a bad thing for students to have and carry to school. Just as there are a number of cons to allowing cell phones to be used in school, there also a number of pros too. Parents can decide if a phone is appropriate for their child and set guidelines on how they want it to be used. Many schools also have set rules on whether cell phones are permitted or not so it is best to check with the school's specific policy before sending your child in with a cell phone.