Since its inception in 1973 by Dr. Martin Cooper, the cell phone has grown in leaps and bounds. In the early years, utilizing mobile equipment entailed carrying around a two-pound, foot-long Goliath that cost a whopping $4,000. Nowadays, practically anyone can obtain an inexpensive handset that weighs under half a pound and is shorter than one's hand. The irony is that the public still complains, though they might gripe less if they only knew the history of cell phones.

If you need help downloading the printable timeline, check out these helpful tips.

Former Motorola employee Dr. Martin Cooper introduced the world to the first cell phone on April 3, 1974, when, while standing near the New York Hilton hotel, he dialed a base station located across the street from the hotel. Almost a decade later, that particular phone finally went public. 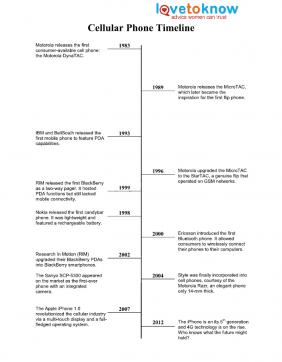 In 1984, Motorola released the Motorola DynaTAC to the public. It contained few features save for a basic numeric keypad, a single-line display and a deplorable battery with only one hour of talk time. Even so, it was revolutionary for the time, which is why only the richest of the rich could afford to purchase one or pay for the accompanying voice service, which cost $50.00 per month, not including $0.40/minute during peak and $0.24/minute during non-peak hour fees.

Six years after the DynaTAC appeared, Motorola took a step further by releasing what became the inspiration for the first-ever flip phone. Dubbed the MicroTAC personal cellular phone, this analog device introduced a revolutionary new kind of flip design wherein the mouthpiece folded over the keypad. In addition, it measured only 9 inches long and weighed under 1 pound, making it the lightest cellular device ever produced.

It was during the 90s that the type of modern-day cellular technology you see everyday began to form. The first text messages, digital signal processors and high-tech networks (iDEN, CDMA, GSM) all sprouted into existence during this tumultuous time period.

In 1993, IBM and BellSouth teamed up to release the Simon Personal Communicator, the first mobile phone to feature PDA features. Not only could it send and receive voice calls, but it could also serve as an address book, calculator, pager and fax machine. Plus, it offered the first-ever touchscreen by which customers could use their fingers or a stylus to make calls and create memos. 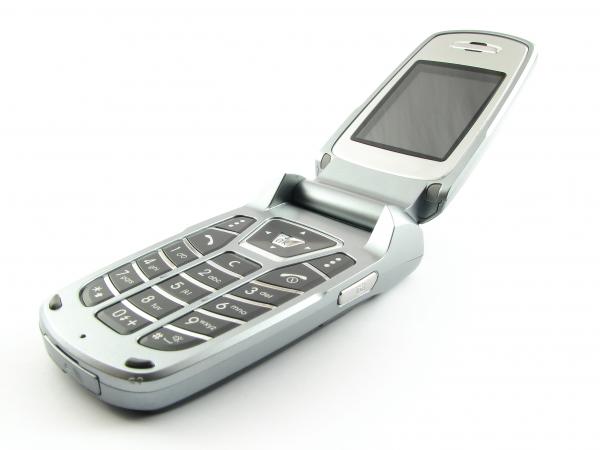 Half a decade after the original MicroTAC, Motorola released an upgrade known as the StarTAC. Inspired by its predecessor, the StarTAC became the first-ever true flip phone. It operated on GSM networks in the United States, included support for SMS text messaging, added digital functions like a contact book and was the first phone to support lithium-ion batteries. Plus, the device weighed only 3.1 ounces.

Nokia popped up on the scene in 1998 with the first-ever candybar phone, the Nokia 6160. Weighing only 6 ounces, the 5.2-inch tall device sported a monochrome display, an external antenna and a rechargeable battery with a whopping 3.3-hour talk time. Because of its price and ease of use, the Nokia 6160 ended up becoming Nokia's best-selling device of the 90s.

1999: Precursor to the BlackBerry Smartphone

The first BlackBerry cellular device appeared in the late 90s as a two-way pager. It featured a full QWERTY keyboard and could be used to transmit SMS/email messages and pages. Plus, it offered an 8-line display, a calendar and an organizer. Due to a lack of interest in mobile email devices at the time, however, the device was used primarily by those individuals who worked in the corporate industry.

The new millennium brought with it the emergence of integrated cameras, 3G/GPRS/EDGE networks and smartphones, as well as the final dissemination of analog cellular networking in favor of digital networking. 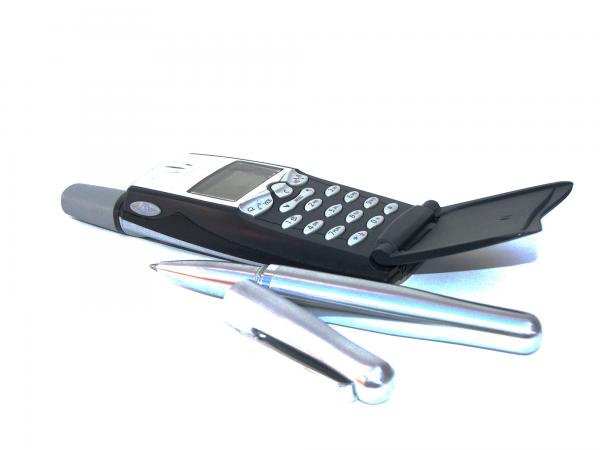 The Ericsson T36 introduced Bluetooth technology to the cellular world, thus allowing consumers to wirelessly connect their phones to their computers. The phone also offered worldwide connectivity via 900/1800/1900-band GSM, voice recognition technology and Aircalendar, a tool that allowed consumers to receive real-time updates to their calendar or contacts folder.

Tired of making PDAs, Research in Motion (RIM) finally took the plunge in 2002 with the release of the BlackBerry 5810. It was the first BlackBerry PDA to feature cellular connectivity. Operating along a GSM network, the BlackBerry 5810 allowed users to send e-mails, organize their data and prepare memos. Unfortunately, it lacks a speaker and a microphone, meaning a headset was required to use it.

The Sanyo SCP-5300 removed the need to buy a Kodak, as it was the first cellular device to feature an integrated camera with a dedicated snapshot button. Unfortunately, it was limited to a 640x480 resolution, 4x digital zoom and 3-foot range. Regardless, users of the phone could snap photos on the go and then later upload them to their PC using a bundled software suite. 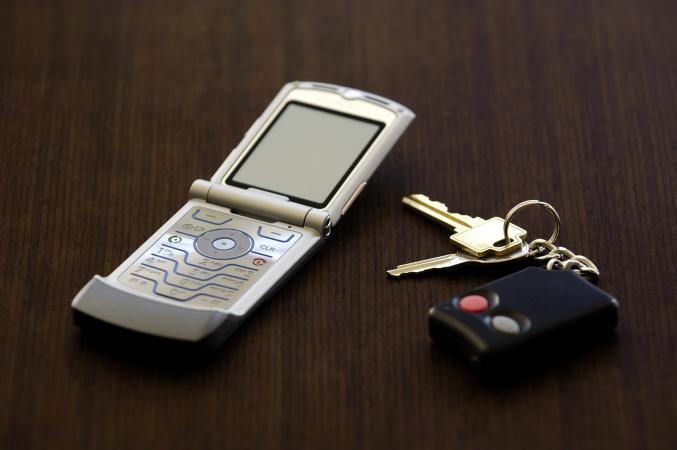 Prior to the release of the Motorola RAZR v3 in 2004, phones tended to be big and bulky. The RAZR changed this with its its ridiculously thin, 14mm-thick frame of aircraft-grade aluminum. Other highlights included an internal antenna, a chemically-etched keypad and blue backlighting. It was, in essence, the first phone built to not only provide great functionality, but to also exude style and elegance.

When Apple entered the cellular industry in 2007, everything changed. Apple replaced the keyboard and keypad with a multi-touch touchscreen display that allowed customers to feel as if they were physically manipulating data with their fingers: clicking links, stretching/shrinking photos and flipping through albums. Plus, it brought the first ever fully-featured platform to cell phones. It was as if they took a computer operating system and squished it into a tiny phone.

As of this March 2012 writing, it's only been two years since the turn of the decade and yet cell phone technology has already grown by leaps and bounds. 4G technology is on the rise, the iPhone is on its 5th iteration and the top smartphones can record full 1080p video, playback full-fledged movies and serve as a mobile hotspot for other devices. The future of cellular phones remains a mystery, but one thing is for certain: it will be remarkable!