Cell phone providers aren't built equal. Each provider offers different plans with unique coverage areas. That said, every potential subscriber should take some time in advance to consider a cell phone service area comparison. There's no point in having a terrific plan and the hottest new phone if you have no service.

It can be hard to make an apples-to-apples comparison of service providers. Use this handy fill-in chart to compare coverage for the companies that offer service in your area. Click the image below to access the printable chart. If you need help downloading the chart, check out these helpful tips. 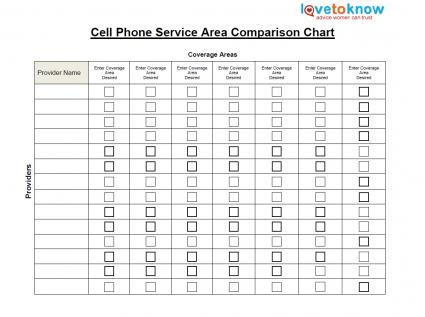 Use the following lists of U.S. and Canadian carriers to get started with your research.

Browsing through these coverage maps can be quite tedious and time-consuming, but it's worth putting forth the effort. Consider not only your primary residence, but also your regular traveling schedule. If you live in Newfoundland but travel frequently to British Columbia, for instance, you should ideally pursue a provider that offers significant coverage in both zones. Remember, preparation is the key to locating an optimal cellular plan.